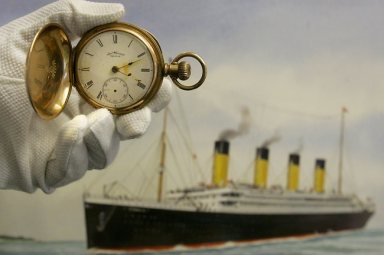 The Titanic treasure trove is going up for auction.  Many critics will sum up the announcement by saying, “greed wins out in the end”.  After 18 years of court battles, the artifacts that have been recovered from the wreck of the Titanic will be sold just before the 100th anniversary of the sinking.  Guernsey’s of New York will conduct the auction, and makes the following announcement on their website:

“On April 11, 2012, precisely one hundred years to the day of Titanic’s maiden voyage, there will be an unprecedented auction of artifacts recovered from the wreck site of the legendary ocean liner, and related intellectual property and intangibles. Guernsey’s will be offering all of the assets and rights of RMS Titanic, Inc., a division of Premier Exhibitions, Inc. (NASDAQ: PRXI), which for 18 years has served as steward and salvor-in-possession of Titanic and its wreck site.”

The assets, according to Guernseys, “include the complete collection of more than 5,000 artifacts, as well as other extraordinary intangible assets, in the first and only sale of objects that have been recovered from the wreck site of Titanic two and a half miles below the ocean’s surface.”

The question of the precise number of artifacts in the “complete collection” will undoubtedly raise the ire of Titanic followers and purists.  The reported number of artifacts removed by the salvor are no longer available on the Premier Exhibitions website. However, a year ago, the website’s FAQ section was much longer and offered the following:

To date, RMS Titanic, Inc. has recovered over 5,500 objects from the wreck site, ranging from delicate porcelain dishes to a 17-ton section of the hull.

The documentary Titanic Revealed, produced in 2004 states there were more than 6,000 artifacts recovered.  It also explores a number of the arguments at play in the raging debate over whether recovering artifacts from Titanic was grave-robbing or an effort to preserve history.

The rules governing the auction of Titanic salvage say all of the artifacts must be sold in one lot, so any dreams fanatics might have of successfully bidding on a Titanic teacup to display in the family china cabinet are impossible. There is also a series of court ordered covenants and conditions that are intended to ensure that the public will continue to have access to seeing the collection, or at least part of it. One would hope that there will also be strict oversight of how the winning bidder is protecting the pieces and making them available to the public. The temptation to slip a few of those items into the black market might well be exceptionally high.

You may have been among the 22 million people who have seen some of the auction items  in the traveling Titanic exhibit that brings a couple of hundred items from spoons to plates and buttons to a town near you.

For a fee of about $20.00 you are given a “ticket” with a passenger or crew name so that at the end of the tour you can learn whether that person survived.  Six such tours are simultaneously offered in different cities at any given time and both Edmonton and Regina have shows at this writing. The tours are for profit, and done on the cheap, with little more than the bare minimum to satisfy the searching gaze of true Titanic enthusiasts, but they provide, at least, a chance to see something of what remains from Titanic.

The future of those tours, as popular as they are, is now unclear.  One can only anticipate that a fresh round of court appearances will ultimately define what is to become of the Titanic treasures and the access the public will have to appreciate them.

12 thoughts on “Titanic: The Auction – How many items?”